We’re still happily parked at Pancho Villa State Park in Columbus, New Mexico, just three miles north of the US/Mexico border and the Mexican town of Palomas. We haven’t done anything super-exciting, so I thought I’d just give you some quick notes from the past few days–this is real life for us.

Last Saturday was a day for chores. I cleaned up the inside of the rig, then we drove to Deming (about 40 minutes north) for laundry and grocery shopping. But before we started chores we treated ourselves to lunch at Marie’s Italian Grill. The restaurant is located in the old Deming National Bank building so it has some character to it. Business was slow, but the service was excellent and the food was pretty good, especially for a small town. I had the eggplant parmesan and Andy had spaghetti with marinara. We split some fried mushrooms, and for dessert we had spumoni ice cream, which we haven’t had since we last ate at Fred’s in Houston, Texas sometime in the 90’s.  We really liked Marie’s, and would definitely eat there again.

After a good lunch, it was time for chores, starting with laundry. On the road, we do laundry about once every two to three weeks, so there’s a lot to do, especially with towels and bed sheets. The large commercial machines make it quick and easy to get it all done.

We used the Pine Street Laundromat based on their Yelp reviews, and it wasn’t a bad experience. The place was clean, there was an attendant on-site, and most of the machines appeared to be in working order. We did three large loads of laundry for $8.75. 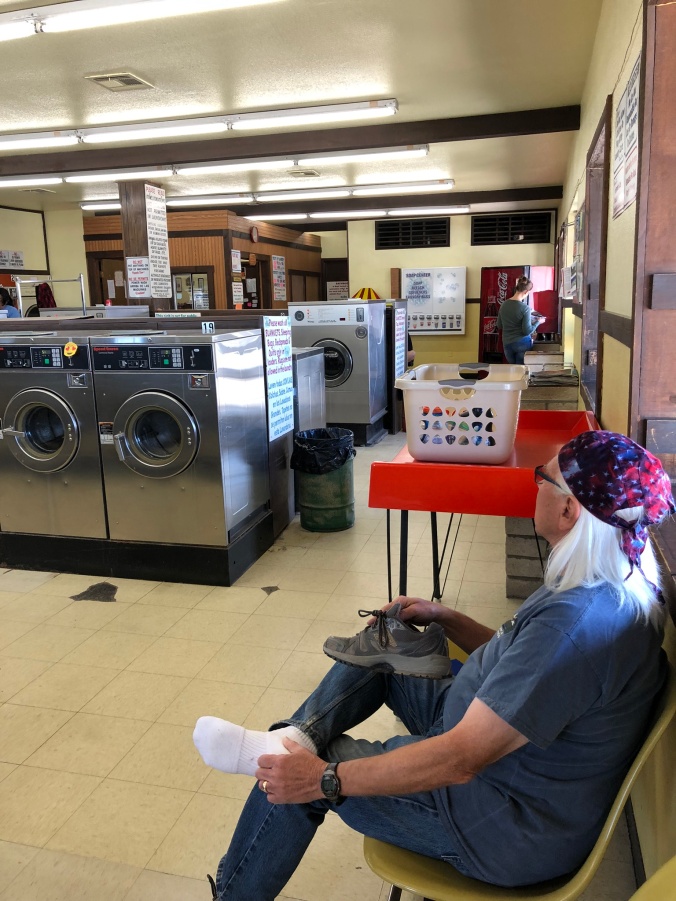 After the laundry was done, we headed to the local Walmart Supercenter to get groceries and water. Yes, we are hooked up to water at the campground, but we use filtered water for drinking, refilling our own containers from the Primo dispensers in Walmart for $.29/gallon. The Walmart in Deming is pretty nice as far as Walmarts go–their produce was fresh, and that’s what is most important to us when grocery shopping.

On Sunday we did a little exploring around the little town of Columbus. When Pancho Villa’s men raided the town in 1916, they burned four adjoining buildings including a hotel, a mercantile store and two residences. The foundations of those buildings are still visible in a vacant lot that’s pretty overgrown. There’s a small plaque nearby that has a picture of the hotel as it existed, and a picture of the owner who was killed in the raid along with some of the guests. Kind of spooky to be standing in a spot where so much violence occurred just over 100 years ago.

We drove up and down the streets of Columbus, many of which are not paved. We found the local elementary school on the outskirts of town, and it actually looks very modern, well-equipped and maintained.

Not far from the school, we found the local cemetery where we got out of the truck and strolled around (Andy has a real interest in cemeteries since he worked in the business when we lived in Phoenix).  This one was very interesting in that there is an obvious Hispanic area where the graves are colorfully decorated, some with elaborate structures built around them, and names like Gomez and Hernandez on the markers. Another section is obviously Anglo with simple, unadorned grave markers with Anglo names. There is also a separate section specifically for veterans with a US flag flying overhead. The cemetery appears to be undergoing an expansion with lots of new trees being planted and irrigation systems being installed.

Columbus has a few small restaurants but we haven’t tried any of them. They also have a small library/computer center that has kick-butt fast wi-fi, but you have to be seated in the right place to get a good signal. The library appears to function as the local hangout for a lot of folks in town, as we found on our last visit. In addition to supplying a few books and some wi-fi, they also have a lot of wired computer terminals that anyone can come in and use. Great service for this small, relatively poor community.

On Monday Andy and I walked back across the border into Palomas to re-visit the bakery. This time we did a little more exploring on the main drag, checking out some of the local shops where they sell mostly shoes, belts and clothing items. We visited a local grocery store where we saw a lot of American items labeled in Spanish. There was a meat counter that was very busy, but only a small produce section.

We picked up a big bag of freshly-baked pastries for only $3.80. Next we stopped at a Del Rio convenience store and picked up a bottle of Cabernet from Chile for $5.50 (it was actually very good!).

Yesterday (Tuesday) I cooked a pot of spaghetti in the Instant Pot and we invited Gary (our next-door neighbor) to come over for dinner. He brought a cucumber salad along with his guitar, so after dinner we spent a fun couple of hours doing a sing-along. It was so much fun that Molly even came out of hiding to sit on the bed and listen.

Here are some other interesting things we’ve seen here in the campground and in Columbus: 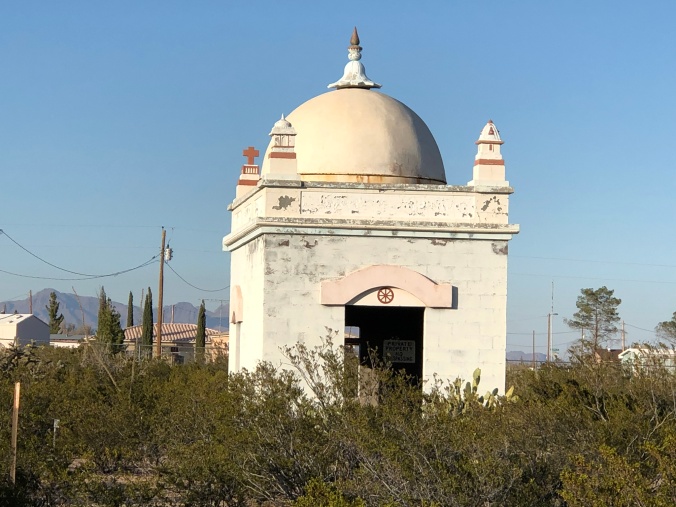 Shrine to the Perfect Man in Columbus NM

We still have four nights left here in this park before we leave on Sunday, so we’re going to try to see a few more things in the area, including one more trip to the Pink Store in Palomas for lunch and a visit to another local museum.

If all goes according to plan, we will be boondocking a lot more in the next few months. We’re discussing the possibility of getting a couple of solar panels and a Kodiak portable charger–we’ll see how that goes. We do have a generator onboard that can power our air conditioner and microwave, but it would be nice to have a quieter source of power when all we need to do is charge our electronic devices.

So, everything is well with us. We’re getting plenty of sunshine and exercise, eating healthy food (well, except for those pastries!), drinking plenty of filtered water, reading, singing, enjoying time with new friends, sleeping well, exploring, taking care of chores…..

If you enjoy reading these updates, please let me know in the comments, and feel free to subscribe to see what we’re up to next. You can also follow us on Instagram at Instagram.com/JustCallUsNomads for updates between the blog posts.

Hope you’re following your dreams and living the life you always wanted! If not, what are you waiting for??