Yesterday I said good-bye to my baby. I didn’t want to do it, but if we’re going to chase this dream, then it had to be done.

Yes, I found a buyer for my 2007 Toyota Prius, and after meeting in downtown Tupelo and going for a quick test drive, we stepped into the downtown BancorpSouth building where the buyer works, and took care of the transaction on the spot. From there, we drove a couple blocks to the county courthouse and turned in the license plate at the tax collector’s office, and the deal was done. The whole thing took less than an hour. 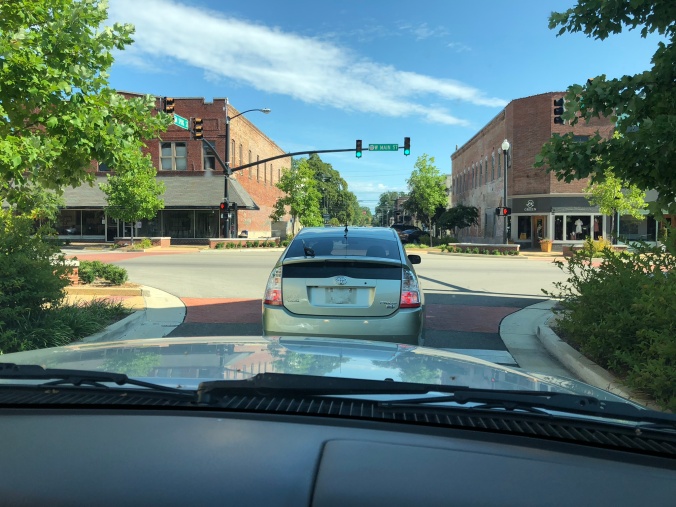 That’s my baby, being driven by her new owner.

It seems so strange to step into the garage and only see one vehicle parked there. But I haven’t really had a lot of time to dwell on it, as the days are really starting to go by quickly now, and we still have so much to do.

After we got back from selling the car, I spent most of the rest of the day wiping my Dell computer to prepare it for sale. It has a 2TB hard drive and a 30″ monitor, along with a set of Bose speakers. I did a total reset, which completely wiped the drive and then reinstalled Windows 10, leaving it in an out-of-the-box condition for the next owner. I then listed it for sale on Facebook Marketplace for a screaming deal of a price, and immediately found a buyer–my brother! Yep, he knows a good deal when he sees it! Enjoy the the system, Mark!

We have (or had) a lot of Southwestern collectibles from when we lived in Arizona, and we’ve found that Southwestern art does not really appeal to folks here in the South, so we haven’t really been able to re-home any of it. I’ve posted a couple of pieces for sale on Ebay this week to see if they’ll sell, and if not, they’ll all go to Goodwill. That’s sad, but it’s just not practical to try to keep it all. A lot of the pieces were sitting on shelves in the entertainment center behind a glass door where we never really saw them anyway, so were they really that important to us? Probably not, and it just makes us realize how much money we’ve wasted on stuff that doesn’t really bring us joy.

Today I spent most of the day doing more scanning and shredding of old records and documents. We have a fireproof lock box to hold all our really important documents like passports, birth certificates, etc., and that will stay in the RV with us. I bought a little scanner several months ago, the ScanSnap S1300i, and it is doing an awesome job of scanning old records quickly and efficiently. I’m saving the scanned files to our Dropbox account so we can access them from anywhere. I should have done this long ago even if we weren’t planning to get rid of everything and live in an RV. So much paper, all shredded and out of my life.

I also cleaned out the drawers in my nightstand, and ran across this dress and shoes from when I was a baby. I thought about hanging on to it, but decided to just capture a photo of it and then let it go. Once again, it was something that was just hidden in a drawer anyway, and the photos that I took are just as meaningful to me as the actual items. Since we don’t have children, there’s no one to pass it along to anyway, so it was just time to let it go.

My dress and shoes from when I was a little younger.

Andy measured the bed of the pickup under the camper shell and then picked up the new storage bins that we’re going to use in the truck. He’s already packed his off-season clothes in one of the bins, and I’ll work on mine this week. I spent about an hour this evening going through all my toiletries and make-up, purging and combining things to get down to the minimum number of lotions and potions that I want to take with us. We have a fair amount of toiletry items that we had stocked up on at Costco, like bar soap, makeup remover wipes, Breathe Right strips, etc., that we don’t want to just toss. So we’re storing them in a smaller bin that we’ll use until that stash is depleted, and after that, no more stock-piling at Costco!

We also got a couple of administrative type things taken care of today.

First of all, I finally received my COBRA information from my last employer, so I was able to get enrolled for continuation of my health insurance benefits, including dental and vision for both myself and Andy (he’s on Medicare so he wasn’t on my health insurance). It’s really good insurance, and it turned out to be less than what we had budgeted, although it’s still obscenely expensive. I’m enrolled in a high deductible plan because I don’t have any known health issues, I’m not on any medications, and rarely see the doctor. The monthly premiums are:

Secondly, we have our new mailing address! No, I’m not going to publish it here on this blog, but it’s in Livingston, Texas. Now we can start the process of filling out all those change-of-address forms. That’s one of those things about moving that I always dreaded, but now that almost all our business is done online, it’s not nearly so bad.

So that’s what we’ve been up to for the past few days. Still have not sold the dining room furniture or the microwave hutch, although I’ve lowered the price a couple of times. The bad thing about Facebook Marketplace is that you have to wait a certain number of days (10?) before you can re-post something, even if you change the price. With only 20 days left until closing, we may have to get more aggressive.