We made our second trip to Wall Doxey State Park over the Labor Day weekend, and despite an “antsy” start, we enjoyed the weekend immensely.

We left home after I finished work on Friday afternoon, pulling out from home just after 5PM, and arriving at our campsite a little after 6PM. This time we were in site #36, which has a perfectly level concrete pad and lots of great shade.

We got set up pretty quickly, and then I cooked some pasta for dinner. The sauce was from a jar but I added sauteed onion, garlic and mushrooms, as well as some vegan Gardein meatless meatballs. Andy had made a big chopped salad for the weekend, which we topped with our favorite gourmet vinegars, and we also opened a bottle of wine. Great dinner!

However, it didn’t take long after we got there for the ants to find us! When we were at Wall Doxey two weeks earlier, we had a problem with ants getting in the cat food that we normally just leave on the floor for the girls to nibble on, so we knew we couldn’t leave the cat food out. But this time the ants found the chocolate chip cookies that we were storing in the overhead compartment. The cookies were in a clamshell package from the bakery, and the little buggers had no problem at all finding their way into the package. They were also trying to get into the Tupperware container that held the dry cat food, but fortunately they had not succeeded when we sighted them.

We wound up putting the cat food in the refrigerator, but the cookies were a lost cause as far as I was concerned. But my hubby, who can’t stand to watch a TV show where someone is drawing blood or throwing up, decided that a few ants would just add some protein to his cookies. He spent a good half hour going over each individual cookie, brushing off the ants he could see (they kept burrowing and hiding under the chocolate chunks), and then he put the cookies in zip-lock bags and put them in the refrigerator. And he’s still eating those cookies, even though an occasional ant still scurries across the surface.

Even after we hid everything that we thought the ants might be after, I was still seeing a line of them in the overhead storage area, as well as some others scattered around the RV (around the sink, near the dinette, in the shower). So I finally grabbed a can of Off! and sprayed the overhead. Dumb move….with the vent fans blowing, the bug spray quickly spread throughout the RV, and only then did I think about the cats breathing in that stuff (as well as myself since it blew back in my face).

Long story short, the ants pretty much disappeared and the cats survived, although one of them threw up a little bit right before bedtime. I felt terrible about possibly harming them with the spray, and won’t make that mistake again. Before our next trip, Andy is going to bomb or spray the RV thoroughly to get rid of any critters that might still be in there. We’ll also carry some ant baits with us in the future.

Otherwise, it was a very relaxing weekend. The weather was perfect, considering it is still late summer–the remnants of Hurricane Harvey had passed through here the day before we left and there had been a lot of rain, but the rest of the weekend was mostly sunny with lower temperatures and humidity.

We did a hike on Sunday morning around the lake after having our “traditional” Sunday-morning-in-the-RV breakfast of fresh-baked cinnamon rolls. We cooked a foil-packet meal of onions, peppers, garlic, potatoes and Tofurkey kielbasa. We had our first campfire of the season on Saturday night, although the wood that Andy gathered was pretty damp from the Harvey rain so it didn’t burn very well. 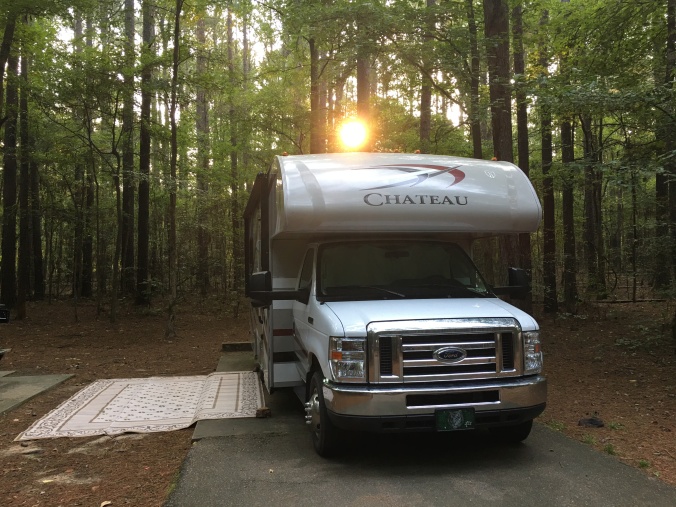 One of my favorite parts of each camping trip is getting up early in the morning while Andy is still asleep and then going for a walk while it’s still peaceful and quiet outside. The temperatures each morning were in the low 60’s, and I enjoyed some peaceful walks around the campground and down to the lake.

We broke camp around noon on Monday (Labor  Day), and after a stop at the dump station we headed home. We let the cats ride free both coming and going on this trip, without being confined to their crates. I drove on the return trip, and Maggie eventually settled on the back of the dinette where she could look over my shoulder out the windshield. Molly, however, decided it was safer to stay under the seat, which was fine until we got home, and she refused to come out. It took me a good 15-20 minutes to finally drag her out without hurting her or pulling any of the under-seat wiring loose. While we don’t mind the kitties hiding under the seats while we’re in camp, we’re going to have to come up with a solution to keep them out of there while we’re in motion–another project for Andy before our next trip.

Since we’re planning to become full-timers, we try to learn or experience something new on each trip that will help us in the future. In addition to the above, some other new things this time were:

Last of all, we have a bit of a mystery going on. The RV has two bubble level indicators on the back to help when setting up. On our last trip we found that one of the indicators had lost the liquid from the little glass tube.  On this trip we found that the second indicator had also lost its liquid. No idea what’s happening to them, but we need to get those replaced.

Now we have just under three weeks to get ready for our next adventure, which will be a 381-mile trip to Sevierville, TN for our first RV rally! Stay tuned!!