Our first outing in Lizzy has been a rousing success!

We spent the past weekend at Tishomingo State Park in the northeast corner of Mississippi, about an hour from our home in Tupelo. It’s a place of scenic beauty, although the facilities are beginning to show the effects of budget cutbacks in the state’s financial priorities.

When we made our reservations for the campground, there were only two RV sites available, so we didn’t have a lot of choice about where we parked. Our site was #20 which was located on the side of a hill across the road from the lake. Like all the sites in the park, ours was very wooded and shady. On the downside, there was a lot of moisture seeping from natural springs in the hillside running alongside our concrete pad, making it continuously moist (and that was BEFORE the rain). The grill and picnic table were uphill behind the RV, and since the hill was so steep, the picnic table sat at an incline. The RV pad itself was just slightly off-level, so we used leveling blocks under the front wheels to correct the slant. 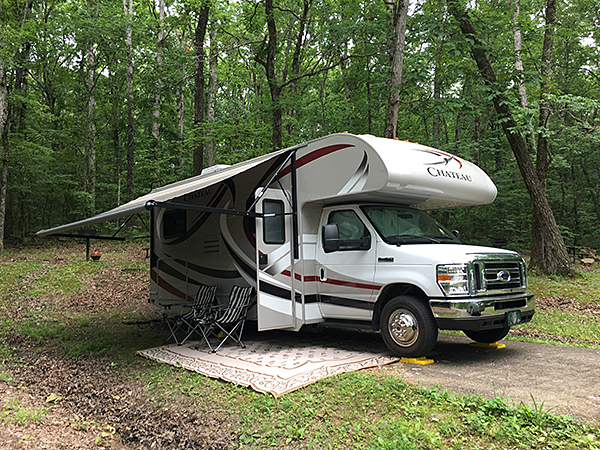 Since this was our first RV experience ever, we wanted to make sure we tried and tested every system and piece of equipment in Lizzy. We ran the air conditioner almost the entire time we were there since it was so warm and humid. We quickly adapted to the foot-flush toilet, and enjoyed our hot-water showers although we kept them short to avoid filling up the gray tank. And we enjoyed watching a couple of DVDs on the 32″ flat-screen TV when it was raining outside.

The refrigerator and freezer worked perfectly, keeping all our perishable foods fresh (very important for us since we eat a LOT of fresh and frozen fruits and vegetables). The three-burner propane stove lit up with no problem. We quickly learned to work around the small, shallow kitchen sink by using a plastic basin to wash the dishes and then rinsing them in the sink. The highlight of our equipment “testing” was the combination microwave/convection oven. I steamed vegetables in the microwave, but I also baked cinnamon rolls for Sunday breakfast using the convection feature, a first for me. They came out AMAZING!

All the electrical systems worked correctly, as did the awning. There was plenty of power in the 30-amp system to power everything that we needed, including our electric coffee percolator and my Instant Pot, which we used to cook dinner on Sunday night.

We had no problems co-existing in the small space. The large windows make the space seem larger, and we also spent a lot of time outdoors. The bed is technically a full XL (you have no idea how hard it is to find fitted sheets for that mattress), but with the foam pad that we added on top of the RV mattress, it was very comfortable, even though it was cozy.

There was only one glitch that we noticed, and it happened on the drive over and then again on the last morning before we drove back. The RV has a dashboard system that includes the backup camera monitor, radio, auxiliary input, etc. For some reason, we could not get the display to work so Andy could not see directly behind him as he drove. For some reason, once we got to the campsite and hooked up to shore power, the display worked fine, at least until the last morning. Not only were we able to use the auxiliary input to play music from my iPhone, but we could also see behind the RV via the display coming from the backup camera. But then, mysteriously, it stopped working again on the last morning. It’s something we’ll have to figure out, but Andy just used the extended side mirrors during the drive with no problems.

There were some other minor things–no conveniently-located electric outlet for the electric percolator (it has a very short cord); the air conditioner is pretty loud which makes it hard to hear the TV; there was no rack in the convection oven to place the baking pan on, so I just jury-rigged one out of the included grilling rack which I knew we would never use for grilling since we don’t eat meat.

Our final initiation into RV life came as we were leaving when we had to dump the gray and black tanks for the first time. We had watched enough YouTube videos to feel pretty confident about the process, and we made it through without making a mess or gagging.

I shot lots of video with the GoPro, so stay tuned for some footage of our stay at Tishomingo. We had some excitement on our second night when a storm front moved through around 12:45 AM with near-continuous lightning and straight-line winds near 70 MPH. We were fine inside the RV, and it wasn’t until we took a drive through the park the next day that we saw all the downed trees and branches. So thankful that no one was hurt, as far as we know. 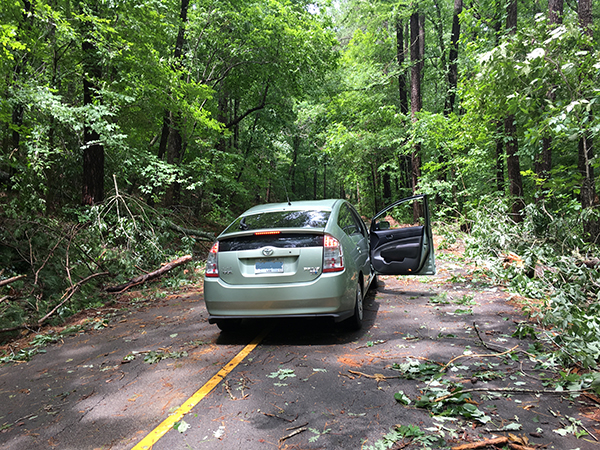 Now we’re looking forward to our next trip in less than two weeks, when we’ll be introducing our two fur-babies, our cats Maggie and Molly, to RV life. There’s no way we can plan to make this a full-time lifestyle if the fur-babies are not part of it, so their initiation begins soon. Wish us luck!